So in our whole soap about how to get RAID1 on our OS disks in a S2D setup, we actually found an answer. The solution was to use a HBA330 for S2D setup and a seperate H330 RAID controller for the OS in the flexbays. This was confirmed by Dell. My concern was this wasn’t configurable if you ordered a Dell server, but this has been fixed.

If you want to order a R730xd S2D config and have RAID1 on the OS disks, select this option; 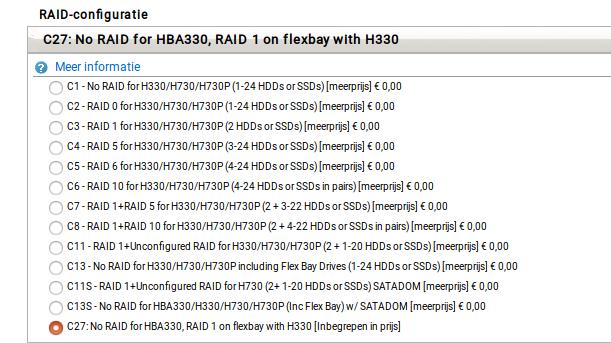 That will unlock (it almost looks like a game) the on board HBA330 and add-in H330 RAID Controller;

Personally, I would recommend you wait until the R740xd s2drn documents are available (this was supposed to be halfway September, but I think they are about due) and configure R740xd for your setup, preferable with 24 NVMe’s ;-). So even though it’s nice to have things fixed, it looks a like a little too late to me.

By the way, it seems not possible to use the flexbays with RAID1 for a R740xd setup, you are supposed to use the BOSS cards. I don’t like that option, I prefer to hotswap a OS disk instead of opening a server, so I have asked questions about this at my contact at Dell.