So we use KMS for our license keys install, which is great but the VAMT GUI is much better for a overview than the slmgr.vbs script. 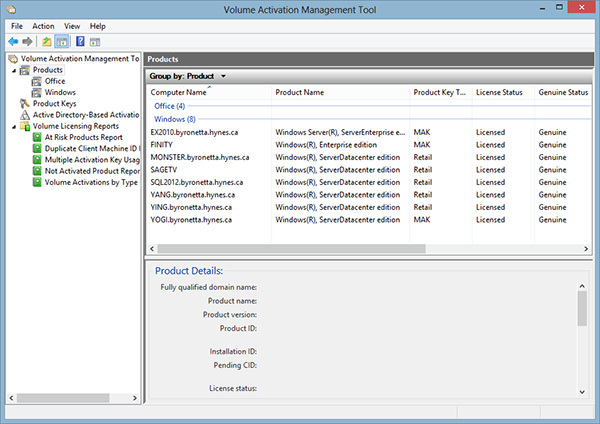 So i figured just find a new adksetup, which contains the VAMT tool. But my search didn’t find a new VAMT or adksetup for Windows 2016. I did find one for Windows 10, but i figured it was just for desktop systems (which we don’t have in our AD).

So i found this article so I thought, “easy, just install 2 updates for my WS12R2 server and let’s go”. So I installed the 2 updates here and here. Then I installed the KMS key through slmgr.vbs /ipk [LICENCE KEY]
slmgr.vbs /ato
Which completed succesfully.

I’ve been using KMS for while, but if you haven’t there is some great firsttimers content on Didier’s blog.

But my goal was ADBA, as 95% of our hosts utilize the newest OS, especially in our Office environment, which is our small (20 users) environment where we first experience the newest products. we actually have some big ass deployments here, like a 4-node Exchange 2016 cluster balanced with Kemp LB and a 2012R2 RDS implementation which contains a SQL AAG cluster, etc. etc. The reason I’m installing is to get Windows 2016 up and running for Storage Spaces direct.

But after adding the GVLK client keys for Windows 2016 server, it failed with
“specified product key is invalid, or is unsupported by this version of VAMT”. 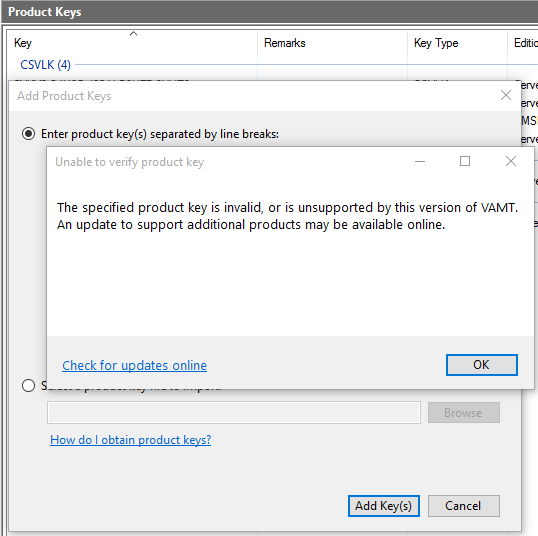 The update link sent me nowhere, I already had that version installed.

So i tried method 2 from kb3094354, but still no success. But there was a mention I should post the xrm-ms file to

So I decided to try the Windows ADK for Windows 10, version 1607, although there is no mention about Windows 2016 on the main page or technet.

And guess what.. it accepted the WS16 GVLK/CSVLK keys!

The Tool in the meno still mentions “Volume Activation Management Tool 3.1”, but it is a different version that i had installed; 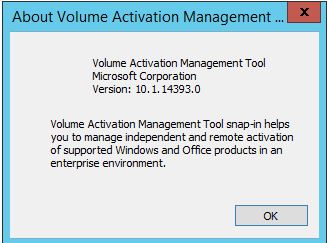 It points to C:\Program Files (x86)\Windows Kits\10\Assessment and Deployment Kit\VAMT3

The old one said; 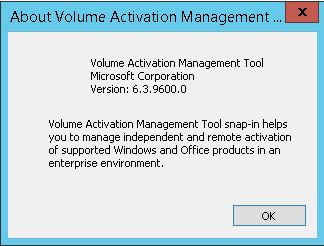 The old one is also still here: C:\Program Files (x86)\Windows Kits\8.1\Assessment and Deployment Kit\VAMT3\VAMT.msc but it starts the new version.

So, that is solved.. But it took me quite some time, figuring I needed to install only 2 updates.. And all that because has its versioning and documentation not in order. I know WS16 has reached RTM only a short while, but KMS/VAMT are only logical first steps for accepting WS16 so I would think the documentation should be in order after the GA. That’s where the RTM-GA time frame is for right? I had a lot of problems with the documentation for Storage Spaces Direct as well, which can be avoided sooo easily. I have better things to do than chasing documentation or puzzling what to do.

O well, sigh.. I hope this helps others out there.

Update1: I forgot you need to add the CSVLK keys as well, these are your personal keys from the MS Volume License Center, also mentioned in Didier’s post.

Update2: If you want to publish the key in AD with function “online active forest”; 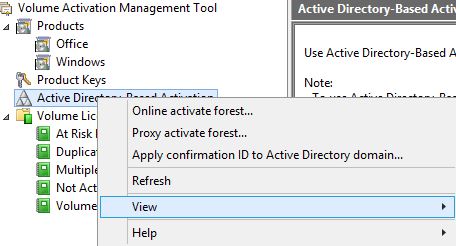 You will need Internet access. Else it will through an error “0x80072ee2”.

Update 3: aargh.. this is taking whole day and a bit more. Now it’s 0xC004F050 as error while activating the ADBA keys for WS16. But.. this error is on actually on my part as I didn’t read the whole KB article before installing;