Virtualise GPU with XenApp and VDI

I was at BriForum Europe and one of the more interesting presentations was actually a sponsored session from NVidia showing us their Virtualized Graphic card options.

I don’t really believe in VDI (apart from specialized use cases), but this was interesting! Because the technology can also be used for XenApp/RDS services. They offered “Grid” cards “K1” and “K2” hardware GPU’s to place in servers (Dell, IBM and HP are mentioned), and on some servers you could fit 2 cards (like the Dell R720). The K1 has 4x GPU’s on board and the K2 has 2x GPU’s. Another difference is that the GPU’s on the K2 are more heavier than on the K1. This is due to how the hardware could be used on different platforms, but more on that later.

The whole session is available on Brian Madden, but i thought the overview/understanding could be better so that’s why i wrote this blog. Btw, if you are going to see the presentation now, let me warn you that the first 25 minutes is “sales talk”.

I made a screenshot of the slide with the scenario’s; 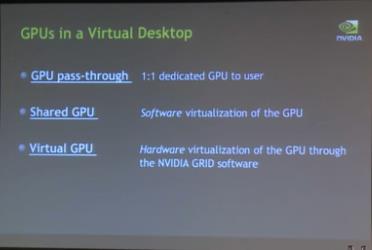 This is a good slide to start explaining i think, let’s elaborate a bit;

GPU pass-through, where the VM “owns” the GPU;

GPU sharing (in the datasheet it’s called API, more on that later).

Hardware vGPU (grid with K1/K2) is more like the virtualization as we want to see it. There are quite a few terms for it as you can see;

The 3 scenario’s and details are all in a datasheet from NVidia, but it confused me. NVidia calls XenApp “Virtualized Applications” and XenDesktop is called “Virtual Remote Workstations”. They are correct, but these terms apply for many other solutions (didn’t they pay attention to BriForum? :-P) so it might be clear to them but certainly not for me. Creating this post made it more clearer for me, and i hope to saved you some time. All the above is explained in the presentation from 26:14, with demo time starting from 41:50 with some figures on scaling. You can find the presentation here.

We will be using the grid cards in combination with VMware and XenApp (in the GPU pass through mode) for some applications, so expect more blog posts about this subject.

And if you want to see more good content about this subject, look at these

update 12 june 2013: i talked to a NVidia support tech and it seems the above story still applies, only Xenserver allows only the virtual gpu scenario. No ETA on VMware of Hyper-v exists.

update 22 juli 2013: some added details on XenApp and XenDesktop versions, read it here.