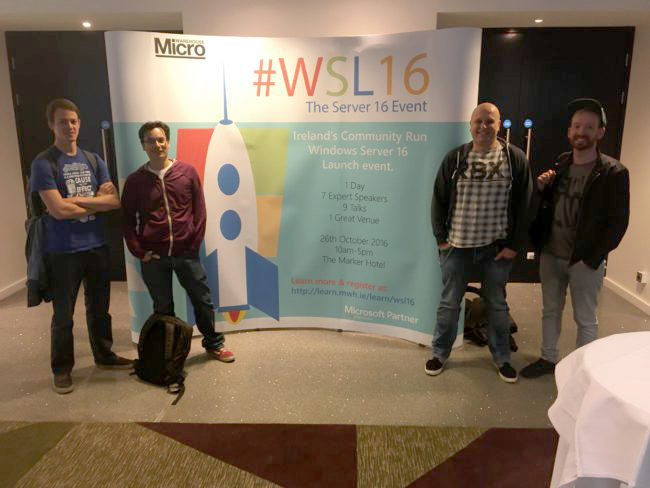 Normally we wouldn’t go to such a event as I think this content is better viewed from the blogs of critical IT Pro’s. But this event was not presented by MS, but by MVP’s. It’s that viewpoint why I like types like Mark Minasi and Aidann Finn, because they are not afraid to say what’s wrong. So I expected a critical note here and there, but sadly I missed that critical note. Having said that, there was good content there, I think they said the slides would be made available, but i haven’t seen them yet.

So most content I already knew, because of reading about the blogs about all the Technical Previews. But there was one I had missed, having been busy with our Nextcloud project (new blogs about that coming soon). I knew about Storage Spaces in WS12R2, but in my view the hardware costs for small clusters isn’t that expensive when buying a Dell MD3xxx series for 8 nodes, so i kind of ignored storage spaces. But in our Nextcloud project we were looking for distributed storage solutions, considering Nunatix, OpenSource solutions like GlusterFS and then there was.. at the conference.. Storage Spaces Direct! Called S²D for short, although everyone writes it like S2D.

The session was given by Carsten Rachfahl and he gave a very good overview of the solution. He mentioned that he made a video with some more S2D hands on. On the way back home we talked a lot about the solution and we were very excited about the solution. I’m personally not a fan of SAN’s or clustering with shared storage, it adds complexity in the hardware management and can make performance troubleshooting quite hard. So S2D looked very promising if we could do that with our storage.

So today I decided to get into some more details and get some hardware to test S2D. But when I looked up the details, there was much to find, but not so much about the current WS16 RTM version. I found it very confusing, so I’m going to share some details hoping I can help you if you run into the same issue;

Some stuff I have to delve further into;

Update 8 nov. 2016: I got in touch with Carsten and he gave me his slides! So at courtesy of www.rachfahl.de, here they are: storage-spaces-direct-without-video