Quizzz: RAID1 setup for the OS in a S2D config..

So following my BSOD post for the S2D config I got lots of responses of people who had similar problems. As it already took me quite some time as converting RAID to/from non-RAID requires a reinstall of the OS, I decided to escalate this to Dell and use single disks for the OS so we could get on with the S2D implementation. The hardware was rented, the price per week was steep so time was short. But as other people started asking questions about the correct configuration, I decided to do some more digging.

As I stated in the previous comments the “S2DRN” (S2D Ready Node) designs show a RAID config for the OS disks and we actually tried to configure this on the Dell website for an other S2D setup and we couldn’t configure the system with the H330-HBA and H330-RAID. Both are named PERC if you are selecting parts, which does not help differentiate: PERC stands for PowerEdge Raid Controller but the H330-HBA is not a RAID controller but a Host Bus Adapter. The H330 in HBA mode is also referenced as a HBA330, but I will call it H330-HBA as I think this make things clearer. Selecting both cards in one system probably won’t work because they are both mini-cards which have to be inserted on the motherboard slot. They look like this; 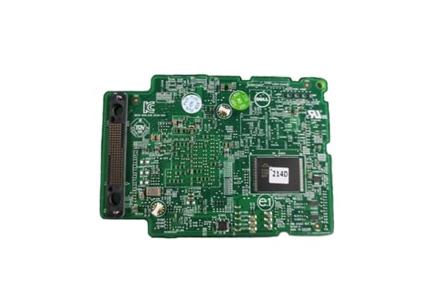 But.. The H330 specsheet shows 2 form factors and in addition to the minicard also a PCI version;

The S2D ready node configuration document just says “internal HBA330”, but do they mean the minicard or the PCI card? As there is also an option to use PCI Cards (HBA and RAID) for external storage, so I’m unsure on what they mean..

So I would assume a setup the with a minicard H330 in HBA mode for the S2D storage and a PCI-H330-raid for the OS. But.. you can’t configure this in the Dell solutions configurator, which is the Dell Partner tool in which most configs should be possible.

Or.. might there be a third option? If I look at the specsheet of the H330-RAID card, it shows;

So it might be possible to select the perc-H330-RAID card and connect the frontbay drives to the non-raid config and the flexbay drives to the RAID part? The S2D ready node config shows that the frontbay drives should attach to a HBA330 and if they ment the RAID version of the H330, they should have mentioned “H330-RAID” instead of HBA330. Also this thread mentions that drives still are viewed as RAID drives when connected to a RAID controller. This can be helped by setting the bustype to 0x100 but MSDN says this is for testing purposes only. It is also discussed (with Claus answering) in this (old) technet forum thread where the conclusion is to use a HBA and not RAID for S2D. Also, if this is the correct way of doing things, I would expect this to be in the S2DRN document (which it isn’t). There is also the issue that you would need to load 2 drivers for the same controller, that would probably not work either I would think.

So summarizing the quizz, how do we get RAID1 on the flexbay disks?

So.. my config took 6 months (!) and lots of lots of engineers have looked at the config specifically designed for S2D and all said the H330 in HBA mode was “the one to rule them all”.. It might be true for the S2D side of things, but the whole RAID1-for-the-OS remains unanswered after 9 months after S2D became RTM. The TP versions and blogs from MS were supposed to prepare us for the RTM version, but the technet documentation that we need (and Dell needed it too) was only available 2-3 months after WS16 was RTM (and in that timeframe I’ve sent soooo many emails about a S2D config to Dell because of the lack of details).

Also, the “S2D ready nodes” (S2DRN) document, which should clear this all up (which just came out a few months ago) does not give enough details to clear this all up. This is all very frustrating.. I would like to see a S2DRN document with all the partnumbers (P/N) listed so we (and all the whole army Dell sales/tech we are speaking to) don’t have to guess.  I’ve escalated again at Dell to clear this up.

ps. A lot of the questions I got were already available in the posts I made, so be sure to check out the other S2D posts.