So i ran into the same problem as stated in this thread, with exact same error. VMM reboot, DB reboot, Remove-SCVMHost, nothing worked. I’ve run into lots of those problems in VMM2008R2 and it got so bad i stopped using the product. I had hoped I wouldn’t have to do this anymore with VMM2012R2, but alas..  For reference, this was on VMM2012R2rollup8 on Win12R2 and a separate SQL server 2012 (11.0.3128.0).

I found my solution through this blog, for which i am eternally great full for. Especially because of the script, because chasing down all those HostID references can be a real pain.

However, I ran into some issues while running the script, so I adapted it a (tiny) bit and wanted to offer the download for anyone, but I couldn’t attach the file to Wu’s blog, so I am sharing it here. I contacted the author of the blog that i made a copy of his script, so all credit goes to Wu.

Before you go to the download, be sure to backup your VMM Database!
RemoveSCVMMhost

And just execute the script!

I ran into the following issue, but that’s just because I’m trying to add the same host under a different name (seems the recommendation is to remove and then re add the host if you want to rename it). If you are doing the same, you probably run into the same problem. If your host does not exist anymore or has a reinstall, you probably won’t need to do the next step.

@Error (21201)
Another machine with the same SMBIOSGUID is found.
Recommended Action
An SMBIOS GUID should uniquely identify the machine. Please provide the correct value or contact the machine manufacturer to help update the hardware with correct information.
Warning (26179)

I looked this up 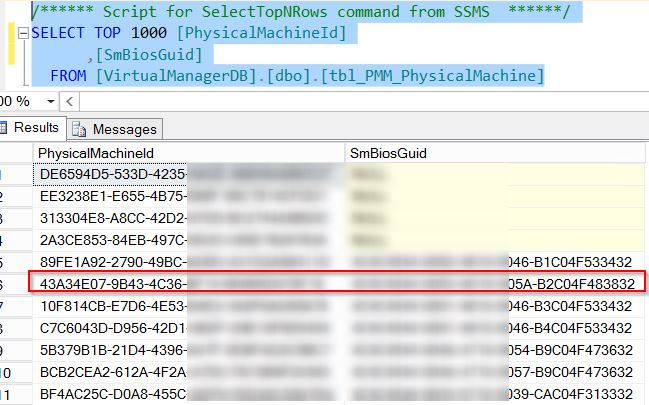 I compared this with the hosts that were known;
/****** Script for SelectTopNRows command from SSMS  ******/
SELECT TOP 1000 [HostID]
,[ComputerName]
,[PhysicalMachineId]
FROM [VirtualManagerDB].[dbo].[tbl_ADHC_Host]@ 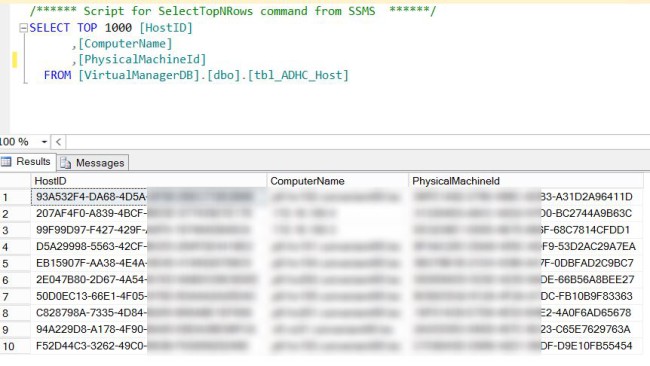 And indeed, there is no known host (i checked the computer name) with that  PhysicalMachineId so i can safely delete that (just right click on the row).

Afther that i found out the host was already added, but just to be sure I restarted the server, removed it from VMM, rebooted and re-added it and this time everything went well.

A critical note though, I really don’t like this database hacking so: MS, get your stuff (VMM in this case) in order!